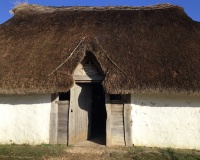 On Wednesday, Year 4 went on a trip to Butser ancient farm where we learnt all about the everyday lives of the Anglo-Saxons. We did all kinds of activities such wattling, spinning, time travelling and archaeological digs.

On arrival, we made our way to a replica of an Anglo-Saxon house which had a blazing but smokey fire in the middle, it was here we had an introduction to the day and dropped off our bags. We were then split into two groups.

We took it in turn to have a go at spinning which is an ancient textile skill in which animal fibres are drawn out and twisted together to form yarn. We twisted it together using a drop spindle, it was very difficult.

The next activity was time travelling through the ages. We started back at the Stone Age and visited some of the round houses, before progressing to Roman Britain. Some of us even got to go into the mosaic room in the villa. This activity was a great recap of the learning from Year3.

After lunch, we completed the final two activities:

The archaeological excavation where we learnt the basic methods to uncover some of the hidden objects beneath our feet which historians use to interpret the past.

The final task saw us using collaboration to create a section of wattle fence. We used long branches of hazel to weave between posts, but we had to ensure we didn't leave big gaps between each hazel piece otherwise the fence wouldn't have kept live stock contained.

By the end of the day, we were all exhausted and little stinky from the smoke, but we all had an incredible day despite the freezing temperatures.