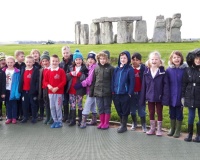 Year 3 had an amazing day at Stonehenge

On Wednesday  (19th October) year 3 went on a trip  to Stonehenge. When we got there one of the leaders took us into a round room which had a screen going round the walls, it felt as if we were in the middle of Stonehenge. The man told us some stories about Stonehenge and we had to guess if they were myths or legends. After that we took a shuttle bus up to the actual Stonehenge rocks and the man told us about a rock which looked like a shark that was there before all the others. Then we made up our own stories out of Lego. After we'd had lunch, we looked at neolithic houses and we saw how they transported the rocks. We also went around a lttle museum where there was a glass box with a skeleton in it which showed what stone age people's body shape might have looked like.