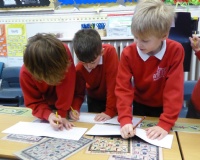 Year 3 learnt all about the Egyptians during Spring Term. We wrote Hieroglyphics, looked at artefacts, made Egyptian boardgames, learnt how to mummify a body and visited an imaginary Egyptain tomb. We used all our new knowledge to write a blog post from the point of view of an archeologist who had discovered a unknown tomb. Here is his story...

As we had entered the sealed passageway the hierogliphics’ colours really stood out on the wall. By this time, I crept into the tomb and the crews’ candle light flickered and went down and so we all jerked and paused dead silent. We carried on even more cautous than before. It was so exciting but it was so intense it was so hard to express our excitement.

We then found a dead end. We were trying to collect up large stones to chip away at the wall but we noticed that the heirogliphics were in a special way but we all carried on with our chipping and the rocks we were using were crumbling like there was no tomorrow. We had soon made the hole big enough to climb through. As the crew all got through. We were all walking the slowest we’ve ever been in our life!

Straight after that, we were searching and we found two statues facing each other with spears angled as if they were to guard something. Within seconds we grabbed some stones from the floor and started chipping in between the spears. Hopefully tomorrow we can get permission to enter what we think is the tomb of Pharaoh Nagy.