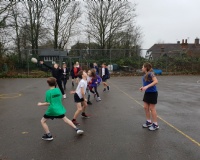 Year 5 have been learning Rugby during their Tuesday afternoon PE slot for the past ten weeks. This has cumulated in a whole year group rugby match on the 10th December. It was incredibly wet but we all showed resilience and kept going! Below is the children's views on rugby this term.

We played a warm-up  game called cats and dogs where you had two people that would stand back to back and one person would be called cat and the other person would be called dog and Emma, the rugby coach, would shout cat and the person that is called cat would try run to the other line without the person called dog tagging them, then the same the other way round.
We learnt to not try to be a hero, just play the game and do what your position designed to do.
Another skill is to stay behind the person with the ball and if you are behind them and the person with the ball run slowly behind them and shout whatever there name is and say pass the ball. We know that; you always have to pass the ball backwards, always try to run forwards, help other teammates to know if you want the ball by shouting their name and saying pass the ball, if a teammate say something that is helpful definitely listen to what they say and maybe use that tip on the pitch because it could really help you and might be able to make you get a try. You can also learn to dodge maybe try tricking someone by pretending your going one way but then you quickly turn the other way and run that way and also maybe have a plan that you've worked with your teammates on who will defend, attack or trick the other team.
Huw says "Rugby is the best!"
Mia states that Emma, the rugby coach, is a hero!
Thomas declares "Rugby is the best sport."
Nina explains "It has helped me so much with my collaboration skills."
Sam tells us "He's loved every minute."
Eleanor explains "It has inspired me to go outdoors and do a lot more sport."
Elizabeth wants to let the coach know "You have helped me with my rugby a lot."