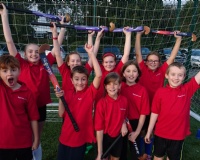 On Thursday 13th of October a squad of 9 children became the first to represent Mayhill in the Rushmoor and Hart Yr5/6 Quicksticks Hockey league. Match day 1 proved to be a steep learning curve for the team, who had not played a competitive game of hockey before. Scores and results for the day against much more experienced teams were; two very close 1-0 losses, followed by a 3-0 loss. However, it was clear to all who watched the team play just how much their hockey skills and tactical awareness improved during the course of the 3 matches. Jack Scotting was our player of the evening for his outstanding defence positioning and tackling, more than once or twice his timely tackles saved what would have been certain goals.

It was a pleasure to watch an enthusiastic group of girls and boys all loving the game of hockey, playing to the spirit of the game and giving their best.

Well done all of you!