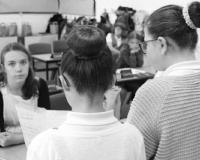 Year 6 well and truly threw themselves back into the past last week in celebration of RAF 100.

We chanted our times tables, wrote lines in order to remember the strict school rules and kept up the, rather tiresome, 'standing up when an adult enters the room' rule.

English was based on a poem with the theme of RAF, and resulted in some brilliant class collaboration, mimicked poems - the vocabulary year 6 were using  was superb.

A mathematical reasoning problem was set for the children around the speed of RAF aircraft from past to present, calculating and converting miles and km to see how fast year 6 could be transported from Lands End to John O'Groats following some strict rules. It was a tricky task, but in the end they flew through the challenge.

In science, the year group became cryptanalysts in order to encode and decipher a secret message using electrical circuits and Morse code. This really tested their problem solving skills as they were challenged to use a parallel circuit and light as their means of communication.

We mustn't forget the fun had during a very messy design technology afternoon, where groups of three were tasked with making a biplane out of an unusual building material - toast. Well done to Mrs Gulliver who spent the evening before, toasting 6 loaves of bread in preparation - crumbs!

The week has brought to an end with the very popular, Camo day. Year 6 gave each activity their all as expected and had a fantastic afternoon.

Their attitude towards the week and the changes to their school day was excellent. Well done Year 6 and thank you to the RAF.