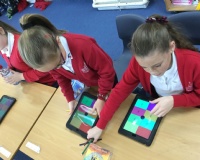 Year 6 Music has just got technical!

Today sees the start of a 3 week iPad composition workshop run by Mr Jones from Hampshire Music Service. The school were very lucky to have been offered some free workshops thanks to Winchfield Music Provision - with Music becoming increasing embedded into school life at Mayhill, we accepted the sessions gladly.

Year 6 used their knowledge of the Musical Elements, namely Texture and Timbre, to start a composition to accompany a short film clip, where Wallace and Gromit see a suspicious penguin on the loose!

The first session was all about experimenting with two sampling apps. One was used to decide on an appropriate leitmotif (a short melody that will represent a character or place) for each character - the Year 6s were fantastic at justifying their choices.  The second app explored was great for creating sound effects to accompany the movement in the film.

Year 6 can't wait until next week when they will start to structure and organise their ideas into a piece of film music.