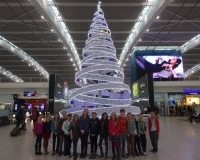 Year 5 and 6 head off for some German culture in the city of Berlin.  Updates daily.  Don't forget to check out the school gallery too.

What an experience today has been.  We all enjoyed ordering a drink and shortcake biscuits or crisps on the flight.  What we found really impressive were the lights and the giant Ferris wheel as we flew into Berlin.  So many beautiful Christmas lights.

After dinner of sausage, mash and sauerkraut, with stewed apple and rice pudding we headed off into the Christmas markets.  So many different cakes, crepes, sweets, wooden carvings and giant Christmas trees.  Even giant white bears!  The smell of chocolate and gluhwien really gave us a sense of Christmas.

Now all tucked up in bed…yes we have brushed our teeth!

Don’t forget to log in to http://magicalchristmas2015.wikispaces.com/  for more wonderful glimpses of us in Germany.

On Sunday, 13th December 2015 year 5 and 6’s went to the Berlin Story Museum.  It was all about what happened through the history to Berlin.  We went into a nuclear bunker from the Cold War.  It was very dark and 3600 people could live here at a time.  Generators created the electricity, but if you lived in East Berlin you had to create electricity using pedal power.  The kitchen was small and had very little food and water in it.  They didn’t have the same facilities as we do now, which would of made it very difficult to keep fit and healthy.

We went upstairs with our guide and saw a time line with all the important year’s in berlins history. The ‘victory’ memorial was moved from in front of the parliament building to where it is. Hitler ordered them to move it because he had bigger plans there. In the end his plans did not work because it was too big.

Also, we got the opportunity to experience a variety of public transport, on the way to the arts and crafts centre, which was situated in East Germany. Such as, a tram, a train and a bus. I know what you are thinking, but a tram is like a train on rails but following the road, it is a lot faster than cars.

Finally, we got to the awesome arts and craft centre, there was lots of unique activities, such as

. sewing a gnome together with chosen materials

We had so much fun and ate lots of yummy food, to it was very big I am surprised none of us got LOST. We are all so lucky to have an experience like this thank you Uk-German connection.

Just writing diaries after dinner ready for a morning in Primary School tomorrow.

Today, guess what? We all had to wake up at 6:45 (5:45 in your time) in time to arrive at the German primary school. When we arrived we were welcomed by 21 German students singing and telling us about their Christmas traditions. Next we all sat together and we asked them questions about themselves, whilst they asked questions about us. For fluent German children, they were awesome at speaking English!!!

After that we designed our own German pop-up Christmas cards. The classroom/cafeteria was very noisy. German children have different rules in the classroom to us. We like the teachers rules at Mayhill, yes the teachers...they are amazing.

Next we went out to play in the FREEZING COLD for our 5 minute break, followed by going to the secondary school to have lunch. Then we sung Jingle Bells and a carol in German, charades, then a full tour of the school. There are many differences between the German schools and Mayhill, for example, instead of trays, they have lockers and instead of stacking their chairs at the end of the day, they hang them on the tables.

After we visited the German school we went to the AMAZING Brandenburg gate we had our pictures taken (AGAIN!!) with the gate. Did you know that the Brandenburg gate separates the east of Berlin to the west. Afterwards we came across the holocaust memorial to remember the Jews that died. The memorial is like a forest and you were like the Jew lost in the forest and the higher the concrete stones got the more people died. It was like a maze in there. We visited the parliament of Germany and where Angela Merkel lives.

On the trip to the parliament we came across a Christmas market where I had a delicious crepe and a nice and toasty hot chocolate. I really enjoyed the Christmas market because of all the beautiful decorations and fun things to do. We saw Luke’s friend Christina she sold warmies which were cute and if you microwaved them they would be warm and they had different scents for example lavender and porridge. Most of us were quite sad when we left the market but straight away we rushed to get on the train to leave back to the hostel.

We really enjoyed today because we saw lots of amazing sights and we’ll be back tomorrow and we are all sad but happy about leaving.

...The blog will be updated tomorrow - 16th - when we return to school.

A final comment from Miss Collis - The childen have all done an absolutely brilliant job in writing the blog - but I must step in and say...what an honour and priviledge it has been to take the year 5 and 6 'Magical Christmas' group to Berlin. Their attitude, behaviour, enthusiasm and manners have been impecable.  Many, many positive comments have been mentioned to me throughout our visit; the indoor voices they use, the fairy feet as they move around, the way they support and look out for each other and from the British Airways Staff who commented on how they have superb manners and are exceptionally well behaved and a credit to the school and their teachers.  Their behaviour was also commented upon by both members of staff from UK - German connection.

Well done to you all - The children from Mayhill, the excellent Mentors from Robert May's, Mr Creagh-Barry, Mrs Marsh and Alison and Luke from UK German connection - thank you!