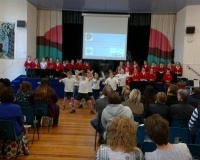 |What a fantastic summary of all the amazing things we have learnt about over the last 40 school days.

We started in Beirut, Lebanon reading a book called ORanges in No Man's Land by Elizabeth Laird.  A book which tells the story of a young refugee who has to overcome fear, loss and possibly death in her quest to find Granny's medicine.

From here we travelled to Venezuela, home to Angel Falls.  Talking of Angle Falls we then studied the Pixar Film 'Up'.  An emotional film about the life of a man called Carl.  It was his promise to his wife Ellie to travel to Angel Falls together but alas she dies and he if forced to go alone...or what he thought was alone until he met Russell, a young Wilderness Explorer.  Having seen the film we then wrtoe short biographies based on Carl's life.

Finally in English we have been studying the Holocaust through the book Once by Morris Gleitzman.  It is a great book, which kept us turning the pages to find out Felix's next adventure through war torn Nazi Poland.  We were all moved by the story, especially as we know that this story is based on a mixture of TRUE stories that happened to the Jewish people. We are currently planning our arguments about whether 'Barney' a character in the book was right to euthanise people before they were murdered or not - a very grow up topic we know.

Staying in America we looked at the amazing, but exceptionally scary adventure that real life climber and mountaineer Aaron Ralston went through when he bcame pinned, hanging from a  boulder, by his arm in the Utah Canyonlands.  We wont say what happened to him eventually...but we are very glad it wasn't us having to experience that ordeal!

In PE we ventured all around the world  - creating sequences of dance moves in the style of 'Where the Hell is Matt 2012' - awesome!  We really liked where he danced under the ocean at the Great Barrier Reef and where he was in Puerto Rico.

Moving on in PE we stopped for a quick 'HAKA' - so much fun but we got sore thighs from slapping them so much!

Trekking around the world we arrived this week to Namibia, Africa.  An amazing country which is in complete contrast to England. We have learnt that they use the Namibian Dollar, That Namibia is the home to the world's highest sand dunes at a place called Sossusvlei - there is even a place here called Dead Vlei - where the trees are 'petrified', dead and are approximately 500-800 years old.  Namibia is one of the driest countries and in some parts of the country is has not rained for over 3 years!

In art we studied Edward Tinga-Tinga, a Tanzanian artist whose work featured wild african animals, black outlining and dots and patterns.  All his work is exceptionally colourful and usually produced using enamel paints.  We use canvases and acryllic paint to create our out work and the results are fantastic.  We have been selling out art work to family and friends so that we can raise money for Sport Relief, as we would like to help others who are not as fortunate as us.

We hope that we have given you an insight into our travels around the world.  We have enjoyed it...all aboard for the next trip of a lifetime.