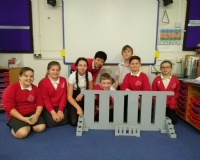 Read about how Year 6 spent the day creating with Lego! Learn the challenges we had to go through.

Written by the Year 6 Digital Leaders

On Monday in Year 6, we spent the whole day making Lego! As we were doing bridges in DT, we decided to make some out of Lego. It was really fun. The people who came in to do it worked for Bright Bricks, a professional Lego company that have broken two world records, one for the longest span Lego bridge, and one for the world’s largest Lego sculpture! They had to build it using cranes!

First we built a prototype. The blue group used all the bricks provided to build the prototype, which was 100. So, we had to build 100 of 4 times the size of one Lego brick. Once we’d done that, we had to build a bridge out of the bricks. They were really big! The red group’s bridge and teamwork was the best, as they won the prize, which was a little Lego set. Their bridge even got stood on, and it didn’t collapse! Other groups were also amazing!

In the afternoon, we did the individual challenge, where we had to build our own bridge each using normal sized Lego bricks. There was a great mixture of very creative bridges, and some people even made a scene!

Overall, we had a great day, and we didn’t have to do any lessons! (No offense teachers!)