Mayhill Junior School stands on a historic site in the Bury and children have been educated here since the 17th century.  It was in 1694 that Robert May, a local mercer, bequeathed, £600 in his will for a school in the parish for ‘the Educating of Twenty boys’. Thirteen years later the Odiham Endowed School was opened. 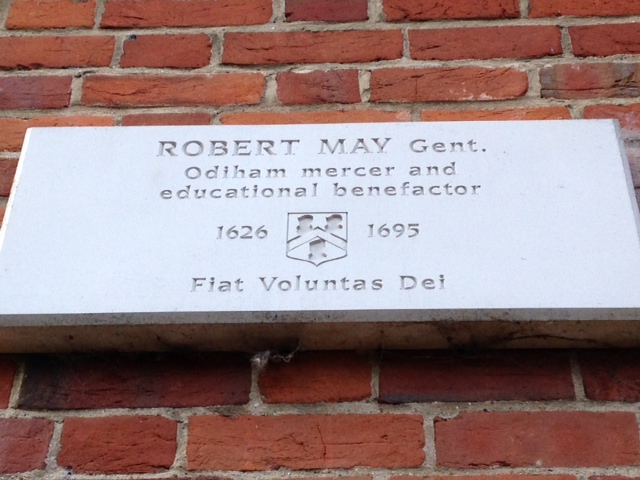 In 1876 the old building was demolished and the current school built. The Board of Governors appointed the Headmaster, the Rev. Alfred Steane.  The majority of the pupils had to pay an entrance fee of ten shillings (50p in today’s money) and an annual tuition fee of between 3 and 6 pounds.  Scholarships were also awarded for up to ten ‘promising’ boys living in the parish.  The school also accepted boarders.  The notice advertising the availability of free places for boys aged between 10 and 13 can still be seen in the corridors of Mayhill today.  At this time the school had a stable, cow stall and pigsty!

1880: The name of the school was changed to Odiham Grammar School

1904: Girls were admitted. Many children walked four miles to get to school.  Football and cricket were played on the field and rounders in the playground (which was laid with grass).

1914 – 1918: In the early years of the war, troops were billeted in Odiham and the school gym was pressed into service.  Two former pupils were decorated with the Victoria Cross – Captain Manley James and the Rev. William Addison and having survived the war, two local roads were named after them.

1932: On 11th November pupils gathered to hear the radio broadcast of Armistice Day ceremonies in London; the first time a radio was used in school.

1937: The RAF station opened in Odiham and there was an increase in the transient population of the school.

1938: The start of term was delayed while Air Raid Shelters were built along the bottom of the playground.  The whole school had to go to the shelters whenever the sirens sounded, 151 times in the first year!  School ended earlier due to the blackout and holidays altered so pupils could assist in potato planting and the harvest.  When peacetime was restored a start was made to wire the school for electricity.

1948: The number of girls at the school reached the same as boys, 55 of each and it was at this time that the future of the school was in debate.  The standard of teaching was never in question but the London Road school (now The Vine Church) was overcrowded and the grammar schools of the future needed to have a sixth form.

1957: The new co-educational Robert May’s secondary Modern School was opened to 265 senior boys and girls with Mr Glyn Thomas as Headmaster.  The school started a magazine called the ‘Mayfly’ which ran until 1972.  The formal opening of the school was in 1958 and wreaths were laid at the tomb of Robert May.

1960: A three acre site in the Bury Fields was bought for use as playing fields.

1965: After numerous fund raising activities and with generous gifts from the Governors, a swimming pool was built in the playing fields.  Within two years 80% of boys and 72% of girls could swim. Unfortunately, despite great efforts, the pool was closed in the early 1990s.

1975: A decision was made that the building in the Bury would become a County Junior School and educate up to 320 children aged 7 – 11 years.  A new name for the school was required and the name Mayhill was selected which kept the connection to Robert May.

1976: Mayhill Junior School was opened under the headship of Mr John Walker.  The Science laboratory was converted into the library and the Headmasters house was converted to provide flats for teachers.

1982: The David Knightly Centre which had originally housed earth closets for the old school and then became a gardening shed, won a ‘Civic Trust Pride’ award after it was converted to an Environment Studies Centre.

1987: The school playground was used by the Prince and Princess of Wales on the occasion of the funeral of Lord Soames (son in law to Winston Churchill).

1988: John Gawthorpe became Head teacher following John Walker’s retirement.  The Old Scholar’s Association continued to hold their dinners in the School Hall which also started to be used by local groups for meetings, functions and to stage local shows.

2014: Thomas May, the existing Head teacher was appointed.

The connection to the RAF remains strong with approximately 35% being children of personnel from RAF Odiham.  Mayhill Junior School has seen many changes, survived two wars, produced heroes and has had a mountain in Greenland named after it.  It has helped in the education of many thousands of children since its conception in 1694.